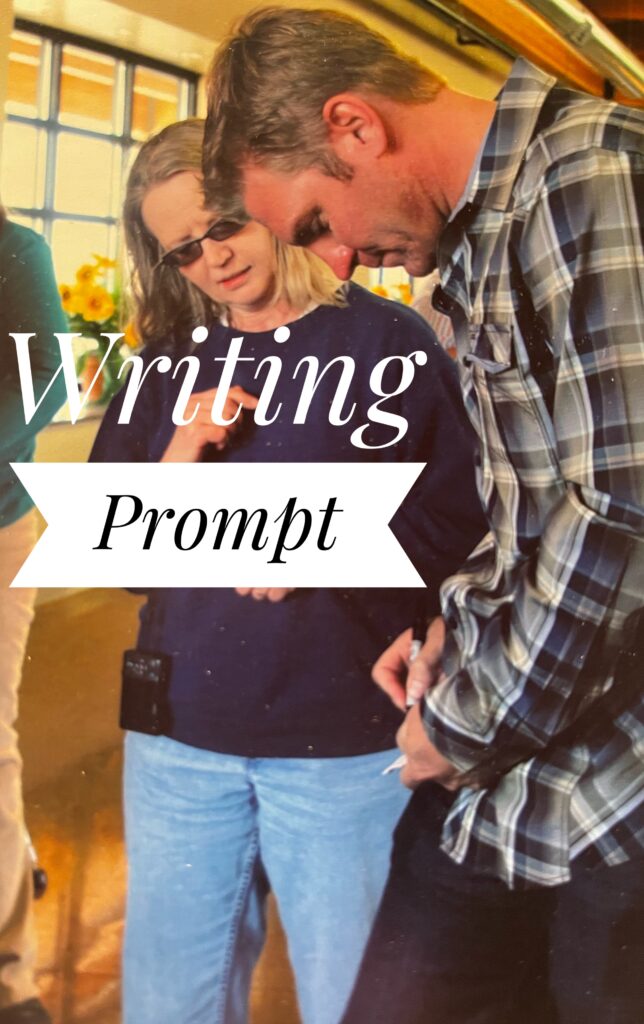 It’s Day 2 of Writing Our Stories, or How to Become a Writer Without Really Trying.

Writing your life stories can be as easy as sitting with a friend drinking coffee or beer. Instead of talking out loud, write it all down on paper or on your computer.

Don’t worry about grammar or spelling or sentence structure. That can all be cleaned up later.

The main thing is to get the story down on paper. I’m here to tell you that there’s great satisfaction in writing a story or an essay or a poem, in completing a piece of creative writing.

Today’s life story writing prompt is this: write about someone famous that you’ve met. If you haven’t met anyone famous, perhaps you’ve had a near miss.

This photo, taken by Betty Anderson, is of me getting Clint Bowyer’s autograph. Bowyer, now retired, was a NASCAR driver who had grown up in Emporia, Kansas. When I heard he was going to be in town, I went to his event to get his autograph for my NASCAR-loving nephews. This was 2012 I believe. Now Clint wasn’t their favorite driver. One nephew was a fan of Jimmie Johnson, and the other might have liked Tony Stewart. Nevertheless, I was hoping to impress Sam and Nik by getting them an autograph from Clint Bowyer.

In using this prompt myself, I could intertwine stories of the various famous people I’ve met, or have seen in person. One of those stories would be from December 1991 when Dave and I were in Chicago. As we entered the Sears Tower from the sidewalk, we saw Bob Vila leaving. The star of “This Old House” was associated with Sears. “Hey, that was Bob Vila!” I told Dave. And then my story would probably wander off into all the oddities of that trip, the Eden Motel, which was a complete story in itself, and the south-side bullet-ridden hotel the next night, and then restaurant where we were the sole diners, was surely a front for some sort of Mob, with men in briefcases entering and heading straight for the kitchen.

The trail of memories is a fun one. Once you start writing, it’s hard to quit. Where is this prompt going to take you